Tag Archives: American Bison battling a clash of the titans

American Bison battling a clash of the titans 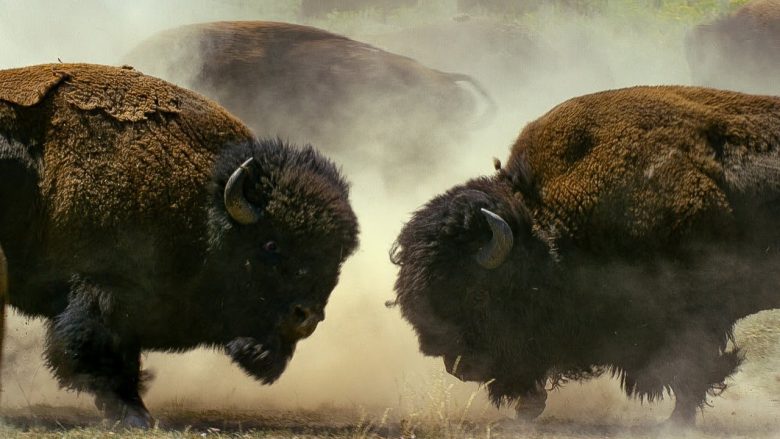 American Bison battling a clash of the titans – American bison are the largest terrestrial mammals in the North America!

They are also a powerful symbol of the Wild West.

These shaggy haired wild members of the cattle family were once the most numerous hoofed animals on the American continent!

Now however, there are only a few thousand left in the national parks.

These colossal mammals are nomadic grazers, and they travel in female lead herds of between 20 and 50 animals, eating grasses and other prairie plants as they go.

The Bison males (also known as bulls) can reach 6 ½ feet tall and weigh almost a ton.

Bison bulls establish positions of rank by fighting each other.

The bull’s immense head and skull is its only weapon in battles with other males.

The bull will first paw the ground, creating a big dust patch, then he will urinate on the patch, turning the area into a pundit smelling pit, which he will roll on.

The male is now ready to fight! The bison have exceptionally powerful front ends, but it is their heads that they will use as battering rams that are unbelievably resilient.

Using a ton of body weight, the males will charge at each other, sometimes reaching speeds of 30 miles an hour!

They are lucky to have the perfect crash helmet! The skull flexes like plastic to absorb the impact and the brain is protected by a forehead with extra skin for padding.

The strong neck also works as a shock absorber.

Fights as such may take up to about 20 head clashes before one of the bulls will even consider backing down.

It is a real clash of the titans! The dominant bull will earn mating rights over all the females which is something definitely worth fighting for!…