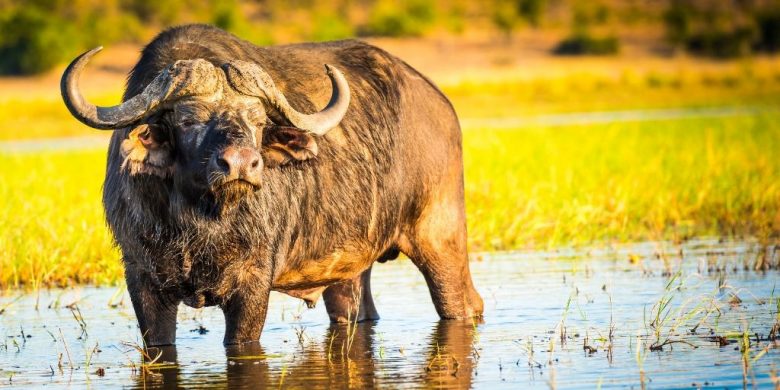 Buffalo Survival Adaptations – The buffalo is a mammal most everyone is familiar with.

It’s the largest land mammal in north America it reaches as much as 2 meters in height and weigh over 900 kilograms.

Yet the buffalo is a herbivore and a prey animal. Humans have been the buffalos most deadly predator.

In the 19th century people hunted this huge animal to the brink of extinction.

Today there re fewer than 500,000 living in parks, wildlife refuges, and on commercial ranches.

Some of the buffalo’s adaptations include a thick coat and a heavy mane of hair that protect them from severe winter weather.

They also have an extremely sharp sense of hearing and smell. They can detect odors from over a kilometer away.

Their size gives their predators such as grizzly bears and wolves a great deal to contend with.

Buffalo are also strikingly fast, at speeds in excess of seventy kilometers an hour, they are faster even then horses.

Wolves are the bison’s natural predator, and they have recently returned to Yellowstone.

Working together, a pack can encircle and kill a buffalo. In this epic battle for life, only the strong survive.

However, the brutal loss of one weak buffalo will ultimately strengthen the herd. .

In spring and early summer, flies are an annoying pest that they continually battle by wallowing in dust baths.

Adult males challenge and fight each other to determine which will be the dominate bull of the herd.

The outcome of this fighting affects the herds future because the stronger more dominate male will father the next generation of calves.

This is imperative, stronger genes will yield a stronger herd.

Buffalo make physical gestures as to their level of anger and potential aggression. Watch out for lifted tails, it’s a warning signal.…