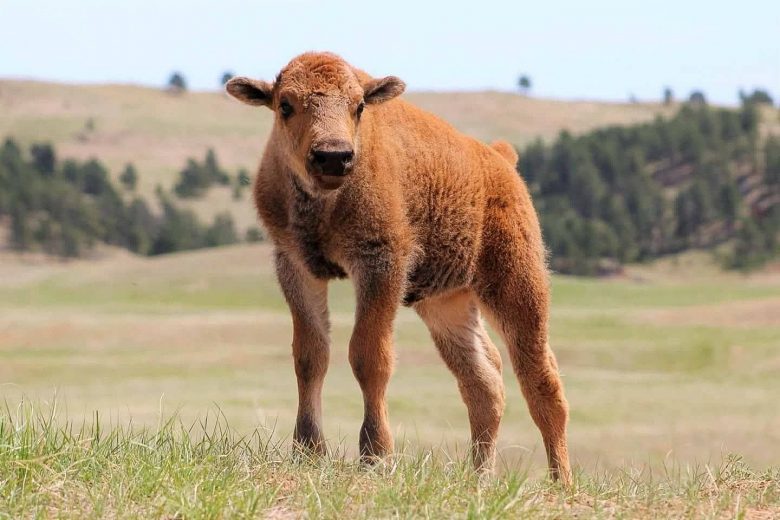 Buffalo Calves – Although the species is starting to flourish again, each year brings a new struggle for the herd.

The newborns hold a key to the herd’s survival, and the first year will be a fight for life, an epic battle that has played out on the Great Plains for tens of thousands of years.

The herd is constantly on the move, and the young must keep up.

At springtime, after a pregnancy that lasts for nine months, the mother bison slips away from the herd to give birth in private.

She licks the calf to clean it and the newborn calf takes its first tentative steps.

Newborn calves are wobbly on their legs, but within a few hours they can walk easily.

This is imperative, because if it falls behind, it could easily become prey.

The mother keeps the calf hidden for one or two days until it can walk well before she and calf rejoin the herd.

A single calf is born to each cow about once every two years. The mother needs to bond with the calf if it’s going to survive.

As soon as the calves join the buffalo herd, they form close ties with each other, but the heard is constantly on the go and it isn’t always easy for them to keep up.

One of their first struggles may be crossing a river. Within a few weeks the calves are practicing their fighting techniques.

They are now weaned from their mother’s milk and graze along with the other herd. It may look like they are having g fun and games, but this is a critical time in a calves life.

Winter is only months away, and the calves must prepare for winter survival.

They must spend this time of year building the body strength that will protect them during the coming winter.

They need to gain about six times their current weight before the first snowfall of late autumn.

Even during the best of times, the calves should never wander from the safety of the herd.

Luckily for the calves however, the herd is always on the lookout.

A cow may live for 20 years, and may give birth every spring, starting at three years of age.

It’s no wonder then, that buffalo were once the most populated mammal in North America.…